Here are a few thoughts to celebrate  National Rum Day!

“The only way that I could figure they could improve upon Coca-Cola, one of life’s most delightful elixirs, which studies prove will heal the sick and occasionally raise the dead, is to put rum or bourbon in it.”

Rum is a staple here at Da’ Reef, it is the coin of the realm, often used to repay a debt or a thank you for a favor.

Rum is a distilled alcoholic beverage made from sugarcane byproducts, such as molasses, or directly from sugarcane juice, by a process of fermentation and distillation. The distillate, a clear liquid, is then usually aged in oak barrels.

Rum plays a part in the culture of most islands of the West Indies as well as in The Maritimes and Newfoundland. This beverage has famous associations with the Royal Navy (where it was mixed with water or beer to make grog) and piracy (where it was consumed as bumbo). Rum has also served as a popular medium of economic trade, organized crime, and military insurgencies (e.g., the American Revolution and Australia’s Rum Rebellion).

For more on the history of rum click below

Rum has been described and celebrated in song and verse through the ages and I have included some of those words of wisdom for you all to ponder.

Pour a glass of your favorite sugar cane juice and toast the day.

“In light rum, there is freedom

in dark rum, there is wisdom

in water there is bacteria 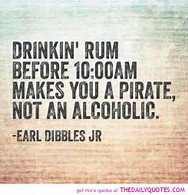 “Why is the rum gone”

One thought on “National Rum Day”